What You Should Know About Jaywalking 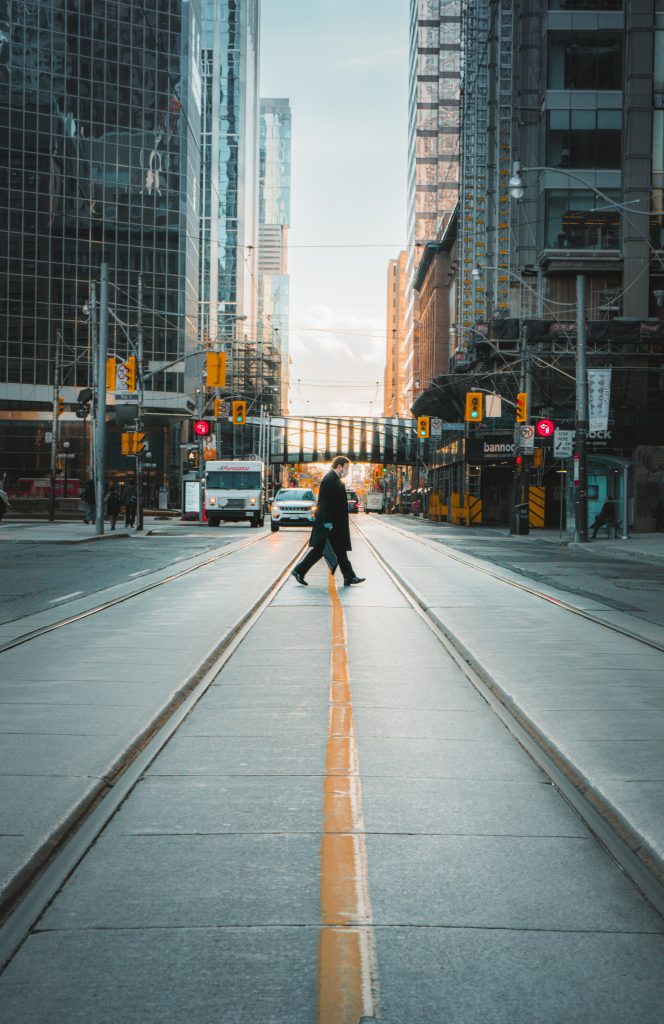 All too often, we find ourselves turning on the evening news to read the headline, “Pedestrian struck while jaywalking.” The term “jaywalking” has brought with it a stigma of being illegal to cross the street at any time when not at a marked pedestrian crossing. Regardless of where a pedestrian is crossing, motorists need to be diligent to ensure that they keep a close eye out for vulnerable road users.

According to Toronto bylaws, it is legal to jaywalk, unless the pedestrian interferes with traffic. Under the Toronto Municipal Code, as long as a pedestrian yield to the right-of-way traffic, they are not in breach of the bylaw.[1]

In R. v. Tablate, a driver was cruising along Sheppard Avenue in Toronto when she felt a “bump.” After pulling over and exiting her vehicle, she observed someone lying on the road, as well as the damage on the side of her car.

The hit pedestrian was charged with s. 144(22) of the Highway Traffic Act, which reads as follows:

The question addressed by the Court was, should a pedestrian crossing a roadway be required to walk more than 100 metres to the marked portion of the road (the crosswalk) and an equal distance back to the opposite side of the road, or is it beyond the requirement of this section for the pedestrian? In its decision, the Court concluded that it is beyond the requirement of this section. What this means is that if you are more than 100 metres away from a marked pedestrian crossing in either direction, according to the Court in Tablate, you are fine to cross. Of course, you should always be mindful of traffic and only cross when it is safe to do so.

Subsequent cases have followed a similar line of reasoning. In R. v. G. Dorian, the police charged a man who suffered a serious traumatic brain injury when he was struck by a motor vehicle as he was allegedly crossing the street mid-block. The Court agreed that it was common sense for an individual to cross mid-block if they were over 90 to 100 metres away from a marked pedestrian crossing. The accused was found not guilty.

Motorists have a Reverse Onus for Striking a Pedestrian

In terms of civil liability, the HTA imposes a reverse onus on a driver who injures a pedestrian on a public roadway.[3] Section 193(1) of the HTA outlines the reverse onus:

Therefore, a driver is presumed negligent unless proven otherwise. This means that a driver must prove that they acted reasonably and properly in the circumstances. The rationale behind the reverse onus is to further ensure motorists act with extra caution around pedestrians and cyclists.