It might be a surprise to some that bicycling injury rates are higher in countries where cycling for transportation is less common. Canada is on the list of countries that underuse bicycling as a mode of transportation. Joining us are our neighbors down south, Australia, Ireland, and the United Kingdom. It is likely that the reason bicycles are not the average Canadian’s preferred method of transportation due to the lack of route infrastructure.

This blog aims to analyze a case-crossover study conducted by the American Journal of Public Health, with a particular focus on the study’s results for the City of Toronto. The conductors concluded that “the lower risks on quiet streets and with bike-specific infrastructure along busy streets support the route-design approach used in many northern European countries. Transportation infrastructure with lower bicycling injury risks merits public health support to reduce injuries and promote cycling”.

At the time of the study, Toronto was home to 2.5 million residents. The participants of the study included those who visited emergency departments to treat injuries sustained in a bike crash. Those interviewed as a part of the study were helpful in determining the types of routes that have the greatest risk. The findings are laid out below.

In this study, route type was associated with injury risk. Cycle tracks had the lowest injury risk, about one-ninth the risk of the reference route type. Bike lanes on major streets with no parked cars and off-street bike paths had nearly half the risk of the reference. Route characteristics other than bike infrastructure were also associated with risk reductions: quiet streets (i.e., local streets); and no car parking on major streets. Shared bike infrastructure (shared lanes, multiuse paths) and pedestrian infrastructure had small risk reductions, and none were significant.

So why doesn’t the City of Toronto invest more money, time, and resources into creating safer spaces for cyclists? According to this discussion in the study, the “higher risk estimates for undifferentiated off-street routes observed in previous studies have been used to recommend against bike-specific infrastructure in Canada”, and coincidentally, the same is true of the United States. 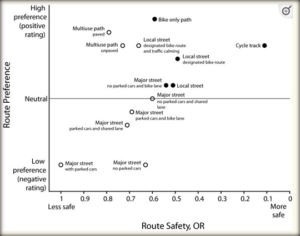 The conclusion of this study shows that the protective route infrastructure like bike-specific facilities, quiet residential streets, and an absence of streetcar tracks can be used for the primary prevention of injuries to cyclists.

So, which of Toronto’s roads are the most lacking when it comes to bicycling? If you have ever wondered where you should avoid cycling in the city of Toronto, consider reading “What are Toronto’s Most Dangerous Roads for Cyclists?” written by members of our firm.

How can MO help?

At McLeish Orlando, our personal injury lawyers have over two decades of experience representing clients involved in complex cycling crash incidents. A cycling crash can be a traumatizing and life-changing event. If you or a loved one has been involved in a cycling collision, it is important to speak to a personal injury lawyer as soon as possible. Call our office today for a free consultation with one of our experienced bike crash lawyers to discuss the next steps.

MORE FROM Patrick
Previous
VIEW ALL