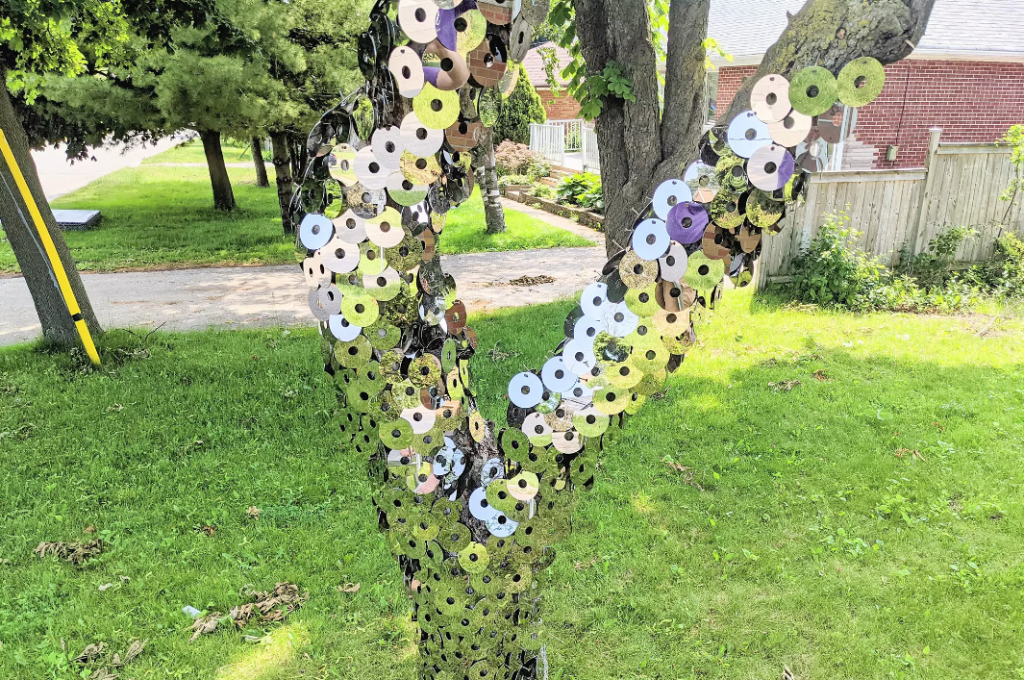 A Toronto man recently decided to turn his front yard into a work of art.  Are we talking Renaissance art?  Modern art?  Maybe more of a Picasso taste?  Not quite.  The former IT worker decided to decorate the trees in his front yard with CDs and old hard drives.

The result?  Slower traffic on his street.  Why?  Just like with collisions on the 401, people are slowing down to look!

This display is certainly catching the attention of passing motorists.  The homeowner used to have a spaceship on his front lawn, and that certainly caught people’s attention.  Lawn artwork is not an entirely unusual concept.  Although we are just entering summer, if we think ahead to December, Christmas light displays are common.

Traffic calming measures have certainly started to rise in recent years.  Kitchener, Albuquerque, and Rochester have all recently taken their turn at trying to slow drivers down with street murals.

Here’s one thing the Toronto man has perhaps not considered: what if his art display distracts a driver and a collision happens as a result?  It’s happened with Christmas light displays in the past, so it’s certainly not out of the realm of possibilities.  Does the homeowner in this hypothetical scenario bear any liability?

A driver passing through a neighborhood is looking at traffic calming artwork.  While looking, the driver strikes a cyclist crossing the road.  The cyclist will surely file suit against the driver.  Can the driver file a third-party claim against the homeowner?

Which area of the law do we look to in order to answer this question?

There’s no easy answer to that question.  Typically, homeowners in Ontario are liable under the Occupier’s Liability Act, which outlines an occupier’s (homeowner’s) duty of care.  Section 3(1) states:

Clearly, section 3(1) does not apply to our situation.  A driver driving on a public roadway is at no time on a homeowner’s premises.  Alright, where do we look next?

It’s still a tough question to answer.  One may think to venture down the road of public nuisance, but it is highly unlikely an individual driver would have the standing to bring such a claim in court.  Public nuisance claims are more for damage to the public and often arise from damage that occurred over a long period of time.

Although a stretch, a court could hold the homeowner strictly liable by determining the artwork to be a non-natural use of land, per Rylands v. Fletcher [1868] HL1.  Although Rylands is an old case, it is still highly relevant in Canadian tort law with regards to strict liability.  Rylands held that a landowner can be strictly liable from damages caused by non-natural land use.  Rylands established three elements that must be met to hold a landowner strictly liable: non-natural use of land, an escape of something likely to do mischief from the land, and damages.

The non-natural use of land is now defined as use that’s dangerous, extraordinary, special, and of no general benefit to the community. [1] Although the artwork could be considered dangerous, it definitely has the possibility to have some benefit to the community in the form of calming traffic.  It’s clearly debatable how a court would rule on this element specifically.

In terms of escape of something likely to do mischief from the land, a creative argument could certainly be made.  Although not a physical escape like the flood in Rylands, a driver could argue that the visual attraction is an intangible visual escape that is likely to cause mischief.

Lastly, damages would be met, suffered by the victim of the collision.

If you are a victim of an injury from a distracted driver, McLeish Orlando is here to help.  Please contact us for a free consultation, and one of our lawyers will evaluate your claim.