A Skateboard is a Vehicle? What the…that’s a total wipeout 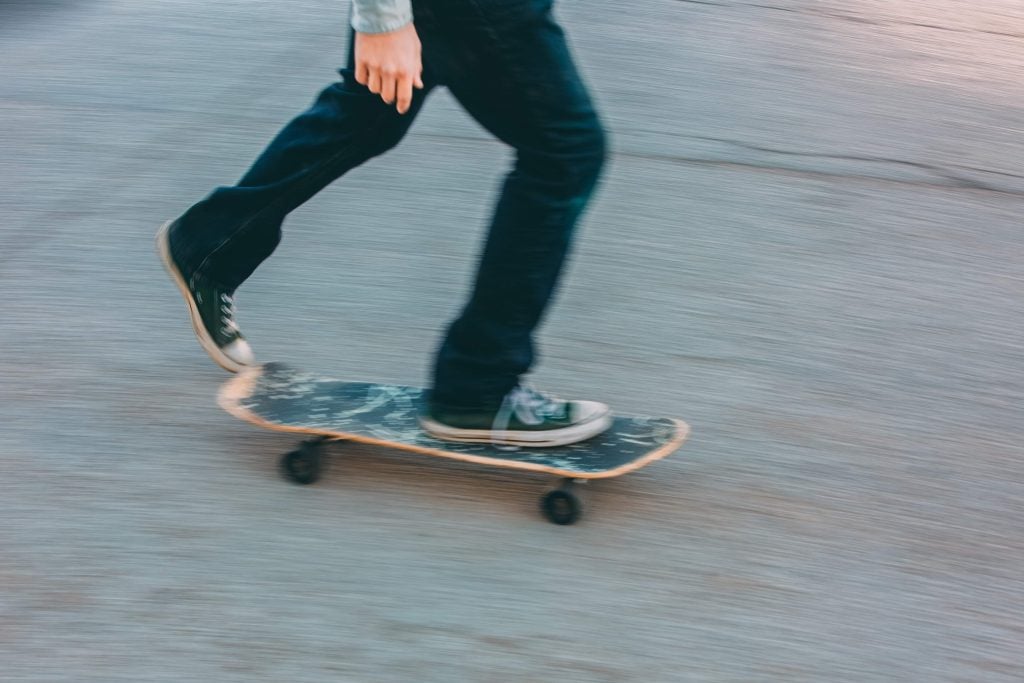 Imagine the scenario: There you are doing kick-flips and other “fresh” tricks on your new 2020 Powell Peralta (it’s a skateboard), when a thought suddenly crosses your mind, “Am I insured if one of my rad moves goes horribly wrong”? “I don’t need a license to operate this thing, do I need insurance”?

The answer is enough to make you rethink dropping in for your next lipslide, list that brand new board on Kijiji, and head home to the safety of your favourite skate video game instead.   It seems absurd but believe it or not, if you’re a skater who doesn’t have access to auto insurance, its time to pick up the phone and see if your broker will ensure your skateboard, because in some jurisdictions your skateboard is a “vehicle”, and you’ll be treated as if you were driving a car instead of riding your board.  We know, that’s decidedly gnarly, in the worst way.  What’s that? You’re a laidback longboarder and think you have nothing to worry about?  Think again dude, read on.

The state of the law in relation to skateboarders being deemed operators of vehicles or pedestrians in Ontario has been the subject of various conflicting interpretations creating many uncertainties for both amateurs and enthusiasts of the beloved sport.

The Ontario Highway Traffic Act (HTA) does not include the word “skateboard” or “longboard” in the definition of motor vehicle or vehicle, yet skateboarders can still be charged for acts normally associated with the use of a motor vehicle such as careless driving and failing to stop at a stop sign.

Section 1(1) of the HTA defines a vehicle as follows:

“vehicle” includes a motor vehicle, trailer, traction engine, farm tractor, road-building machine, bicycle, and any vehicle drawn, propelled, or driven by any kind of power, including muscular power, but does not include a motorized snow vehicle or a streetcar; (“véhicule”).[1]

The definition has a lot of grey areas, and the reason why skateboards seem to be captured by the definition of a vehicle is that they are propelled by muscular power. However, this leads to conflicting interpretations, as cases in Ontario have found persons on rollerblades to be pedestrians.[2] My last pair of rollerblades lacked an electronic motor, how about yours? Most roller blades, like skateboards, also aren’t equipped with a braking system.  Unlike bicycles, neither are specifically included in section 1(1). So why the different treatment under the law?

The Alberta courts have been clearer about the ambiguities in the law when skateboarders are involved. The Alberta Court of Appeal held in R v Atchison, 2006 ABCA 258 that the word “pedestrian” in light of the object and scheme of the Traffic Safety Act, RSA 2000 c T-6, must include persons traveling on skateboards and similar devices. The Court identified a gap in the legislation, as the rules did not deal with yielding the right of way to a person on a skateboard or a similar device.[3] The Court considered the absurdity that a person on a skateboard would not be considered a pedestrian:

10      If persons on skateboards and similar devices are not considered pedestrians for purposes of the TSA, the driver of a vehicle striking such a person could never be charged with an offence; similarly, if two persons were struck, one walking and one traveling on a skateboard or similar device, the driver could only be charged with striking the person who was walking. As pointed out by the summary conviction appeal justice, this is an absurd result and cannot have been the intention of the Legislature.[4]

The Alberta Court of Appeal found that other courts in Canada had taken a similarly expanded view by finding that persons on skateboards or rollerblades were pedestrians in various contexts. The Court of Appeal referenced an Ontario case, R v Greer, 1995 OJ 3655, which held that a person on rollerblades is a pedestrian.

A few years later, a longboard was deemed not to be a vehicle in Ontario. In 2009, 4 teenagers in Owen Sound were stopped by police for longboarding on Grey Road 19 and were charged with Careless Driving under the HTA.[5] A justice of the peace at the Provincial Offences Court in Owen Sound dismissed these charges, citing that the longboard equipment was not considered a vehicle under the Highway Traffic Act.[6] This case exemplifies the discord in this particular area of the law that certainly seems to treat skaters, separately from the other 4-wheelers you might find in the skate park. Brutal Hang Up!

In response to this inconsistency, counties have created traffic bylaws that restrict skateboarding and longboarding on roadways or highways in their communities, a move that we have seen from the likes of Grey County, Guelph, Kitchener, Cambridge, Toronto, and Ottawa, amongst others.

Given the state of things, skaters should follow the local by-laws on the basis that they may be treated as operating a vehicle while skateboarding, wear protective equipment such as helmets, knee pads, elbow pads, wrist guards, closed-toed shoes with a good grip, and ensure your skateboard is in proper condition without any cracks.[7]  Shred hard and let us know what your broker says about insuring your latest “vehicle”.

If you or someone you know has suffered a serious injury due to a skateboarding incident, contact the lawyers at McLeish Orlando for a free consultation.