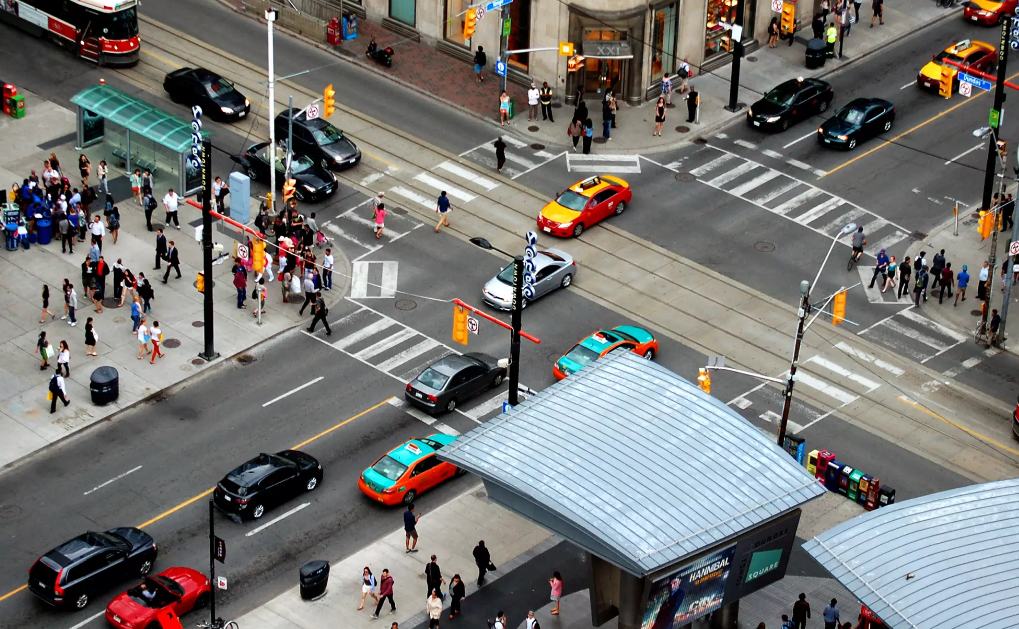 In 2019, a total of 42 pedestrian fatalities were recorded in Toronto.[1] In pedestrian death cases, the Globe and Mail found that more than one-quarter of drivers fled the scene.[2] The number of pedestrians injured in collisions is, of course, far higher. According to one source, 6 pedestrians are struck by vehicles every day in Toronto. Although some political leaders acknowledge Toronto’s road safety crisis and initiatives such as Vision Zero have been voiced, they have largely failed to improve pedestrian safety.

5 common myths have been disseminated to discredit pedestrians or downplay the seriousness of pedestrian safety issues:

A common argument advanced is that some pedestrians become fixated on their phones and walk blindly into traffic. Yvan Baker, a liberal MPP in Etobicoke, introduced a bill called the Phones Down, Heads Up Act, which would prohibit pedestrians from using smartphones while crossing the road, with a $50 fine for the first offence.[3]

While smartphones do play a role, they are not as large a factor in pedestrian collisions as some suggest. Taken from a sample of 1,800 incidents, only about 20% of pedestrians involved in collisions were found to be “inattentive” (this includes other distracted behaviours, not just smartphone use).[4]

The Toronto Police reported that 65% of the individuals killed in pedestrian collisions were 55 years or older.[5] In November 2019, a 77 year old woman was run down while crossing Islington Avenue by a driver who did not stop to help her. Since older adults and seniors are less likely to be using their phones while walking, the blame should not be passed from inattentive and careless drivers to vulnerable road users.

Another common myth is that it is always illegal to cross the street mid-block. This is false.

According to Section 144(2) of the Highway Traffic Act[6], if a street has a marked pedestrian crossing, it is illegal to cross at any other point. However, the Act does not specify how close the crossing must be in order for it to be illegal to cross mid-block. Toronto Police have advised that, generally, if a crossing is further than 30 meters away, pedestrians can cross mid-block legally.[7]

In pedestrian collisions, some individuals may think of the teen with their hood up and headphones on, not paying attention to oncoming traffic, or the busy entrepreneur running to grab their morning coffee before their first meeting, darting into the middle of the road.

However, a 2015 study by Toronto Public Health found that pedestrians had the right-of-way in more than two-thirds of pedestrian collisions.

4) Serious pedestrian collisions usually occur when the weather is poor

One explanation as to the reason why poor road conditions or darkness do not affect pedestrian collisions as much as some believe may be attributed to the driver’s response to poor driving conditions – drivers slow down and become more cautious and alert.

Some believe that reducing traffic congestion levels will improve pedestrian safety. The rationale for this line of thought is that some drivers behave aggressively in heavy traffic, sometimes quickly pulling around vehicles.

Raktim Mitra, professor at Ryerson University, stated she was not aware of any studies demonstrating a link between traffic congestion and pedestrian collisions. Instead, she suggested that research has shown that pedestrian injuries are often less severe in more congested traffic conditions.[9]

These 5 myths only work to mask the harsh reality that pedestrians remain vulnerable and largely unprotected on our streets.

Already in 2020, a 16 year old girl was killed in a hit and run in Brampton, while a 65 year old man was struck and killed while he was crossing a street in downtown Toronto.

Toronto’s Vision Zero program has been ineffective in addressing the city’s pedestrian crisis. One road safety advocate stated, “too many of our political leaders act like they don’t understand what Vison Zero actually is”, calling the initiative an “abject failure”.[10]

In order to reduce pedestrian injuries and deaths, leaders must take the issue of pedestrian and road safety more seriously. Implementing road design solutions, such as traffic calming measures, as well as reducing speed limits in parts of the city could save lives.

The Coroners Review on Pedestrian Deaths’ primary recommendation was to implement complete streets.  That means design that understands all road users, not just drivers. There is no doubt from a wealth of studies and as listed in the Report, that speed kills.  A drastic reduction of pedestrian deaths would be avoided by simply reducing the speed on our streets.

Moving forward in 2020, it is hoped that the talk of addressing the road safety crisis will be translated into action.