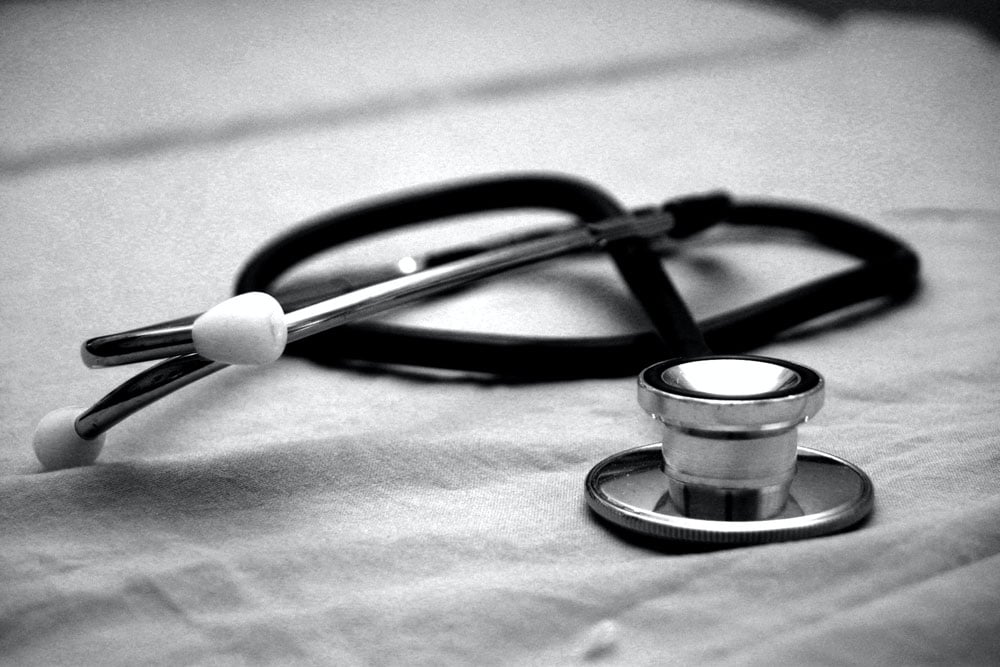 Is the plaintiff in a medical malpractice case required to disprove every possible theory or potential non-negligent cause of injury?

In February 2010, the plaintiff underwent a colectomy (colon removal procedure). The surgery was conducted by the defendant, a general surgeon. The surgery was conducted laparoscopically, meaning it was performed in the abdomen by making small incisions and inserting a laparoscope which lets the surgical team view the affected area from a distance using cameras and screens in the operating room. The surgery appeared to go smoothly – there were no signs that the plaintiff had been injured during or immediately following the procedure. However, the plaintiff began experiencing continual pain after the surgery. Weeks later, it was discovered that her left ureter was blocked, which caused damage to her left kidney, requiring kidney removal in a subsequent operation. The plaintiff alleged that the defendant had caused the scarring of the left ureter by improperly using a cauterizing device known as a LigaSure during the colectomy.

The trial judge was faced with two issues:

The parties called two medical experts each, all agreeing that the LigaSure could cause damage through heat transfer. Further, the experts agreed that colectomies are a common procedure and ureteral injuries during such procedures are extremely rare. In the decision, Justice Mulligan concluded:

[113] In a colectomy procedure, identification and protection of the ureter is paramount. Using a LigaSure can cause damage by heat transmission if it touches the ureter or comes within one to two millimetres. I am satisfied that on the facts of this case, the plaintiff has established that Dr. Ward breached the standard of care.  Further, the breach caused damage to the ureter leading to a stricture of the ureter. This damage required the removal of Armstrong’s left kidney.

The defendant appealed the trial judge’s decision. A majority of the Ontario Court of Appeal set aside the trial judge’s finding of negligence, stating that the trial judge had erred in imposing a standard of perfection on the defendant, rather than one of reasonable care. The majority held that a trial judge cannot conclude that only negligence could have caused an injury without first ruling out potential non-negligent causes. The majority at the Court of Appeal effectively held that a plaintiff must prove that non-negligent causes did not cause or contribute to the damage sustained.

[164] … The trial judge’s conclusion that a reasonably competent surgeon would have stayed two millimetres away from the ureter is fully supported by the evidence. It is not a statement of result or a “goal”, but an essential step that was not taken in this case. ON the evidence, this was a breach of the standard of care.

Justice van Rensburg also commented on the burden of proof of a plaintiff in medical malpractice cases:

[134] The burden of proof was on Ms. Armstrong to establish that Dr. Ward failed to meet the standard of care of a reasonably competent surgeon when her ureter was injured in the course of the laparoscopic removal of her colon. A trial judge is not obliged to consider potential non-negligent causes when there is no evidentiary foundation to do so: see, for example, Hassen v. Anvari, 2003 CarswellOnt 3436 (C.A.), at para. 9, leave to appeal refused: 2004 CarswellOnt 1768 (S.C.C.).

[135] In this case, the trial judge considered and explicitly rejected the nonnegligent causes put forward by the appellant’s expert witnesses. As I have explained, there was no evidence in this trial to suggest that a reasonably competent surgeon, “trying” to stay at least two millimetres away, might accidentally have injured the ureter during this particular operation. The expert evidence detailed earlier was to the contrary. The trier of fact is required to determine the standard of care and its breach based on the evidence and not on speculation. The onus on a plaintiff in a medical malpractice case is not to disprove every possible theory that might be put forward by a defendant, let alone theories that are not raised at trial, but only on appeal.

This decision reinforces previous jurisprudence that the plaintiff in a medical negligence case is not required to disprove every possible theory that might be advanced by the defendant. While the plaintiff in a medical negligence case has the burden to prove all elements on a balance of probabilities, expecting a patient to specify how a doctor was negligent may create an imbalance since the patient usually cannot know exactly what happened during surgery.