A herniated disc is a very common injury arising out of motor vehicle collisions.  Our spines consist of circular bones (vertebrae) stacked with rubber cushions (discs) in between them.  Each disc has a soft centre (nucleus) with a firmer, rubber exterior (annulus).  A disc becomes herniated if the nucleus leaks out through a tear in the annulus.

Below is a cross-section of a herniated disc from the Mayo Clinic: 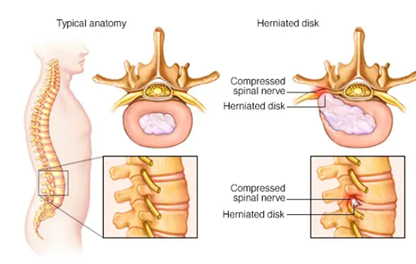 Herniated discs usually occur in the lower part of the spine.  Some people have no symptoms associated with a herniated disc, but the most common symptoms include:

Prescription pain medication and physical therapy are common forms of treatment to alleviate the symptoms of a herniated disc.

If you think you have a herniated disc from a motor vehicle collision, medical imaging will be required to diagnose the injury.  Typically, MRI imaging is conducted, whereafter a radiologist will review the images to look for the signs of a herniated disc.  If the MRI image reveals a herniated disc and you have or continue to require medication or treatment for the herniated disc, then you may be eligible to make a claim for damages.

Motor vehicle collisions involving herniated disc injuries can yield sizeable awards to help pay for medical bills.   One significant case is Hoffman v. Jekel, 2011 Carswell Ont 1245, where the 57 year old plaintiff suffered numerous injuries, including a herniated disc, and missed many months of work due to his injuries.  The plaintiff was ultimately fired from his job as he was unable to perform his required tasks due to his injuries.  The plaintiff’s back condition continued to deteriorate, and it was of his doctor’s opinion that his condition would not improve.

The plaintiff was ultimately awarded $264,622 in damages (approximately $338,000 adjusted for inflation):

A pre-existing spinal injury does not preclude someone who suffers a herniated disc injury from a motor vehicle collision from an award for damages or a settlement.  In Ontario, the thin skull rule mandates that a defendant takes a plaintiff the way they are.  In essence, despite a plaintiff’s pre-existing condition, a defendant is still responsible for the reaggravation of the injury.  As people age, disc degeneration is common because the spinal discs lose water over time, which make the discs weaker, and more prone to herniation.

A classic case of the thin skull rule is Hunt (Litigation Guardian of) v. Martin (2002), 2002 CarswellOnt 2739.  In this case, the plaintiff was 27 years old at the time of the motor vehicle collision when he suffered a ruptured lumbrosacral disc.  However, the plaintiff had previously undergone surgery to repair a herniated disc from a separate motor vehicle collision when he was 21 years old.  The plaintiff was unable to complete all the physical aspects of his job and had to limit his physical activities (both recreational and housekeeping).

The plaintiff was ultimately awarded $100,000 in damages (approximately $152,000 adjusted for inflation):

Medical bills from a herniated disc add up fast.  If you think you have suffered a herniated disc injury from someone else’s negligence, the personal injury lawyers at McLeish Orlando are here to help.  Do not hesitate to contact us for a free consultation, and we will evaluate your case.

MORE FROM Brandon
Previous
VIEW ALL