The winter season is here, parents are busily gearing up for flurries and a drop in temperatures. With some new hats, mittens and big winter jackets being purchased to ensure the safety and comfort of your kids during the winter season, you’re feeling prepared. However, many people aren’t aware of the impact that a big, bulky winter jacket can have on their little ones in the car, especially when in a car seat. 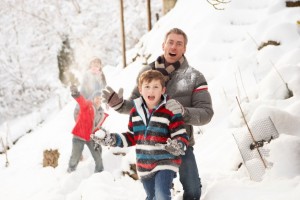 As a personal injury lawyer in Toronto, I’ve seen how important car seat safety is. Many people don’t realize that bulky winter coats on children in car seats are a dangerous combination. Parents bundle their kids up with all the best intentions, but squeezing them into their coats before placing them in a car seat is not a good practice.

Why is this a Problem?

Both car and booster seats are intended to have the straps tightly secure against the body of the child. Bulky fabric can suddenly make those straps too loose in the event of a car accident, and the impact can cause serious injury or ejection.  So, while Transport Canada and the Provinces do not ban winter coats from being worn on children in car seats, they do not recommend it.

Having two young children of my own, I read with great interest, a Globe and Mail article, “Kids shouldn’t wear winter jackets in car seats, so how can they stay warm?” It contends “a bulky coat and a car seat is a dangerous combination.” As a personal injury lawyer in Toronto, I can attest to what is being said in the article. Despite the good intentions, squeezing your child into their coats before putting them into their car seat is not something that should be done.

What should I be doing instead?

Although highly discouraged, if you do insist on having your child strapped in with a big jacket, there is a specific procedure that should be followed.  Consumer Reports recommends preparing the straps with your child in the car seat without any winter gear on.  Then put them in without adjusting the straps – not even a little bit. This can, however, be uncomfortable for the child and a great inconvenience to you as a parent.   Fortunately, there are other options that are also much safer:

A big, bulky coat can make a parent’s most precious cargo too loose in the event of a crash, which is something we all wish to avoid. According to SAAQ, when a car hits another object at a speed of 50km/hour, the weight of people and objects in the car gets multiplied by 20. This means, an 18-kg child quickly becomes a 360-kg rocket. Removing children’s winter coats to ensure that the straps of their car or booster seat are secure and tight to their bodies can reduce the risk of serious injury and potential ejection if an accident were to occur. It takes a couple of seconds, but can save your child’s life one day.