Drivers or Cyclists: Who Has the Right of Way? 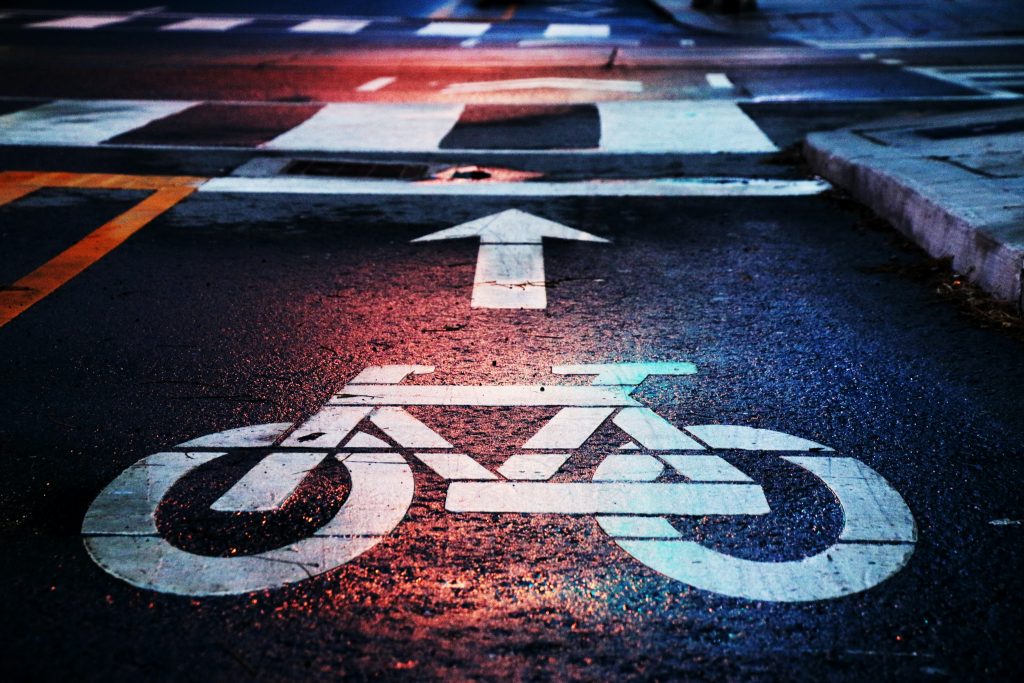 Every driver should be vigilant of cyclists on the road, whether driving in a bustling downtown core or in a quieter suburban neighbourhood. Failing to signal or check your blind spot and mirrors, even once, could lead to tragic consequences.

As reported by Ontario Public Health, although the injury and fatality rates have been decreasing for those inside vehicles, that has not happened for vulnerable road users, such as pedestrians and cyclists. The City and province are taking some steps to educate drivers and cyclists on their rights and obligations, but more progress must be made. A sound understanding of applicable laws and the right of way can help further reduce the number of cyclists getting struck down and killed each year.

Some drivers do not see cyclists at all before impact, remaining entirely oblivious to their presence. Yet cyclists do not appear out of nowhere.

A reasonable driver monitors the space around them through continuous mirror and shoulder checks, both before and during any turn or maneuver. A reasonable and attentive driver knows that the traffic around them could change at any moment and adapts to those changes (just because the road was clear does not mean it will be 10 seconds later). A reasonable and defensive driver anticipates that a cyclist may appear “out of nowhere” and is ready to react.

These attitudes should prevail amongst motorists due to cyclist vulnerability. When pitted against a three thousand pound vehicle, cyclists may lose their life while the driver may sustain a small dent on their car.  Instead of viewing cyclists as being “in the way”, understand that cyclists under the law have just as much of a right to be on the roadway as you do.

One of the most problematic occurrences in the city is when drivers turn right across bike lanes. Another common maneuver that leads to collisions is left-hand turns in front of cyclists travelling in the opposite direction. Some cycling trails in downtown Toronto, including the off-street multi-use trails on Queens Quay, are high-collision areas where some drivers turn left or right into the paths of oncoming cyclists. 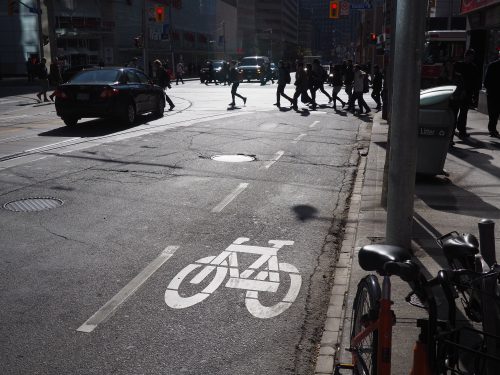 A dashed white line leading up to the intersection means a driver can fully enter the bike lane before turning when it is safe to do so. Safe to do so means when they can enter the lane without impeding the flow of cyclists coming from behind. The same concept of changing car lanes applies. A cyclist ahead of the vehicle is entitled to maintain the lane. The cyclist approaching a right turning vehicle from behind has two options: wait behind the vehicle or pass on the left-hand side when it is safe.[1] 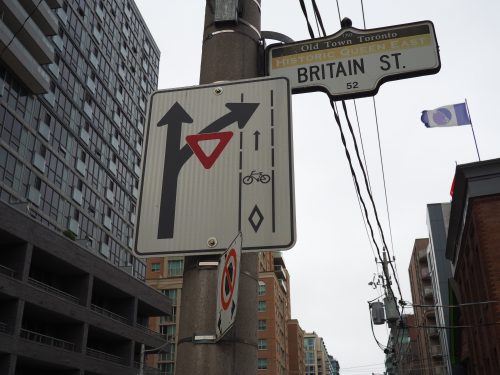 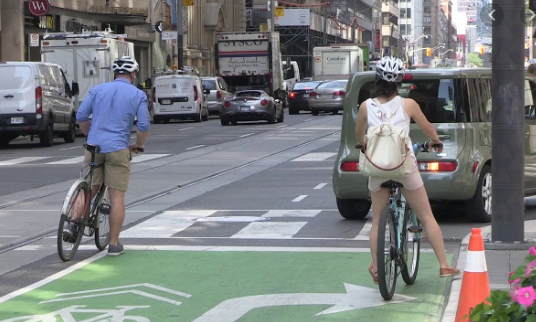 These lanes can be confusing for drivers and cyclists. Most people do not know how they work.

Motorists that intend to turn right at these shared turn lanes should enter the green paint before the turn, preferably as far back as possible. This allows time to straighten out and to avoid making a sharp turn across the entire lane. Motorists may enter the bike lane only when it is safe to do so and the lane is clear of cyclists. Vehicles turning right should “hug” the curb as far to the right as possible so that cyclists can pass on the driver’s side.

Cyclists travelling through the intersection follow the “sharrow” marking on the left hand side of the bike lane, which is considered far safer and prevents cyclists from getting “right hooked” by vehicles.

The Toronto Star monitored activity at this intersection for two hours and identified 609 infractions by drivers and cyclists.[3] Many road users do not fully understand how these lanes work. Be patient and be prepared to yield.

Below is a diagram of how these lanes operate in theory: 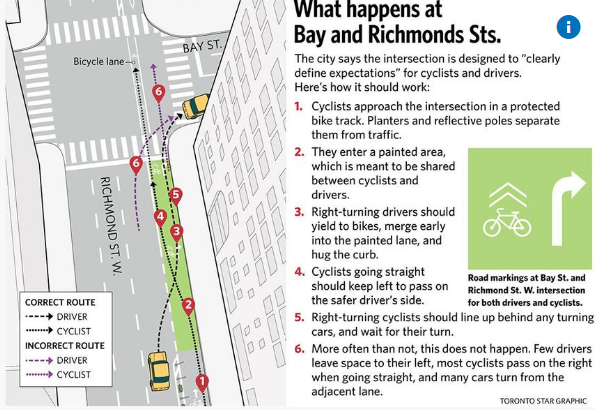 Watch this video to see how these lanes work in practice.

Bike boxes are designated spaces for cyclists to stop in front of vehicles at a red light. Drivers must stop at the stop line behind the bike box. Vehicles are not permitted to stop within the bike box or turn right on a red light. When the light turns green, cyclists are entitled to proceed first.[4]

“Sharrows” or no bike lanes 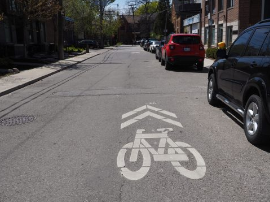 On roads with “sharrows”, motorists may only pass cyclists if there is a 1-metre clearance. Drivers who fail to keep a 1-metre distance when passing cyclists face a fine of $110[5] and up to $500 and 2 demerit points if they choose to contest the charge and are subsequently convicted.[6] If there is not enough room to pass, keep a safe distance behind cyclists.

Stopping and parking in or near bike lanes

It is illegal for most vehicles to stop or park in a marked bike lane. The fine for doing so is $150.[7] Exemptions include ambulances, police or fire service vehicles (or any other vehicle responding to an emergency), loading or unloading of disabled persons from a Wheel-Trans vehicle, or vehicles actively engaged in public works (such as utilities works). Transit/school buses and taxis are also permitted to stop in bike lanes while loading and unloading passengers.[8]

To avoid dooring cyclists, you should perform the “Dutch Reach” when exiting your vehicle.

With all of that said, bike lanes were meant and do reduce injuries and death to cyclists. But they only work when people use them correctly and they are properly designed and repaired.  Not all drivers or cyclists are aware of who is entitled to go first. If there is confusion, it is often best to be patient, remain calm, and yield to cyclists even if you have the right of way. Drivers should ensure they signal, check all mirrors and blind spots, and keep a proper lookout for cyclists travelling in all directions. Always scan for cyclists as you approach an intersection and be prepared to slow down or stop at any time.

Equipped with this knowledge, it is hoped that drivers and cyclists will be able to travel safely and free from harm.