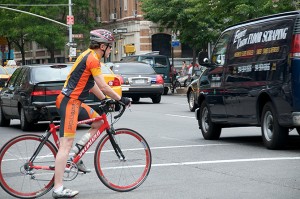 Based on a review of the old and new sections of the HTA regarding riding “within or along” a crosswalk, the following overview is provided to cyclists:

Based on statutory interpretation and a review of the old section, “traffic control signal system” applies only to “a location, other than an intersection”.

“crosswalk” means,
(a) that part of a highway at an intersection that is included within the connections of the lateral lines of the sidewalks on opposite sides of the highway measured from the curbs or, in the absence of curbs, from the edges of the roadway, or
(b) any portion of a roadway at an intersection or elsewhere distinctly indicated for pedestrian crossing by signs or by lines or other markings on the surface

“intersection” means the area embraced within the prolongation or connection of the lateral curb lines or, if none, then of the lateral boundary lines of two or more highways that join one another at an angle, whether or not one highway crosses the other

“highway” includes a common and public highway, street, avenue, parkway, driveway, square, place, bridge, viaduct or trestle, any part of which is intended for or used by the general public for the passage of vehicles and includes the area between the lateral property lines thereof

“roadway” means the part of the highway that is improved, designed or ordinarily used for vehicular traffic, but does not include the shoulder, and, where a highway includes two or more separate roadways, the term “roadway” refers to any one roadway separately and not to all of the roadways collectively

(29) No person shall ride or operate a bicycle across a roadway within a crosswalk at an intersection or at a location, other than an intersection, which is controlled by a traffic control signal system.

(29) No person shall ride a bicycle across a roadway within or along a crosswalk at an intersection or at a location other than an intersection which location is controlled by a traffic control signal system.