By: John McLeish and Lindsay Charles

In the past five years, drivers of Toronto Transit City buses and street cars have been involved in 5,000 preventable collisions. Of those 5,000 collisions, 415 involved pedestrians, and 14 resulted in a death.

In 2014 alone, TTC drivers have been involved in numerous crashes that have sent pedestrians, motorists, and TTC users to the hospital. In some cases individuals have been killed. On October 11, 2014, a TTC bus struck and killed a 65 year old woman walking in a cross-walk just outside of the Lawrence West bus station. On November 9, 2014, a TTC bus crashed into a CIBC bank leaving one dead. On December 19, 2014, a TTC bus struck and killed 14 year-old Amaria Diljohn. The 27 year-old TTC bus driver who struck Amaria failed to remain at the scene of the collision.

Only recently did TTC CEO Andy Byford order a comprehensive review of driver recruitment, training, recertification and monitoring programs. This review was originally ordered after a series of videos showed TTC buses running red lights.  This review is now being fast tracked after the death of Amaria.

The use of dash cams is also being considered by the TTC. Dash cams will show negligent driving by TTC drivers, if it exists.  TTC drivers will be more accountable for their actions. Dash cams can be the much needed ‘silent witness’ to any collision involving a TTC bus or street car.

Go Transit and the cities of Calgary, Winnipeg and Philadelphia have adopted the use of dash cams in their transit buses and streetcars. But the implementation of these new strategies comes too late for Amaria and the many other victims who have been injured or killed as a result of the conduct of a TTC driver.   ave had the privilege of representing a number of individuals who have been injured or lost a loved one, as a result of the conduct of TTC operators or TTC accidents.  We have learned first hand how needless and avoidable most of the collisions were.  We have also seen the devastation caused to the lives of an injured person and to the lives of family members who have lost a loved one. 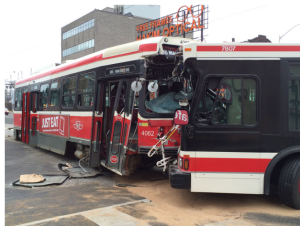