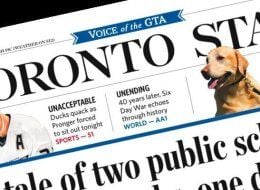 In an earlier post, we criticized a Toronto Star column for biased coverage of recent auto insurance changes.  The column, which was written by Joel Cohen, a representative of the auto industry, presented misleading and unsupported facts about accident victims.  We printed Dale Orlando’s response to the column on our blog and urged the Star to do the same.  To its credit, the Toronto Star did publish Dale Orlando’s response.  A link to his response can be found here (Mr. Orlando’s letter appears below the first letter).

We applaud the Toronto Star for presenting an alternate viewpoint on this important issue.