On September 12, 2015, over 100 riders between the ages of 2 and 12 participated in the augural Miles for Smiles Bike-a-Thon in Leslieville, Toronto in support of the Noah John Winston Miles Foundation.

McLeish Orlando was proud to be the premier sponsor of the inaugural event, which rose over $27,000.00.   The Foundation will be using the money that is raised to support anti-bullying initiatives in the community, with Roots of Empathy being the main beneficiary this year.

The history of Miles for Smiles

The Noah John Winston Miles Foundation was founded by a former colleague of McLeish Orlando, Meighan Ferris-Miles and her husband, Jonathan Miles. Their son, Noah passed away suddenly on January 17, 2015, after contracting Invasive Group A Streptococcal disease. Noah was three-and-a-half at the time of his passing and attended the pre-school at Duke of Connaught Public School, where the event was held.

Meighan and Jonathan started the Foundation as a way to honour their son and work through their grief. Since then, the foundation has become a huge success and the Miles for Smiles Bike-a-thon was a great way to see the community come together and honour Noah doing what he loved to do – ride his trike!

We can’t wait for next year!

Miles for Smiles will take place again next year on Saturday, September 10, 2016.  To learn more about the organization please visit https://noahfoundation.ca/ 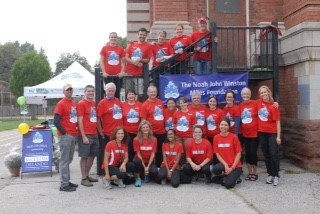 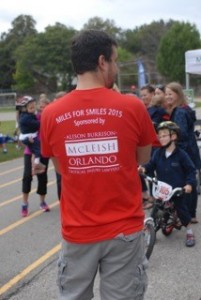